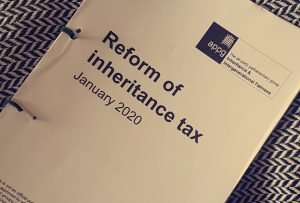 REFORM OF THE INHERITANCE TAX

What is Inheritance Tax (IHT)

Inheritance tax (IHT) is a tax payable by the estate of a person who has died, typically 40% of the gross value of the estate. The inheritance provisions in the UK have not changed since 1986 when Death Duty was abolished and replaced with the current IHT system we have today.

Everyone in the UK benefits from a Nil Rate Band (NRB) currently £325,000. In addition, there is an annual gift allowance of £3,000 or other smaller gift allowances that do not give rise to a tax consequence. An individual can gift a value of up to their NRB each year without having to pay tax on that gift. In addition, if the gift is outlived by 7 years then the amount will be excluded from their estate when considering the IHT liability.

There has been lots of criticism of IHT over the years. It is a deeply unpopular tax and was described in the Financial Times as “Britain’s most hated tax”. It is perceived as unfair and complex, especially when considering the 7-year gifting regime and interactions with the NRB. In addition, it has been considered a “double tax” as someone who has already paid tax on their income during their lives having to pay a second tax on assets which they have saved out of that income. It also penalises virtuous behaviour such as saving and passing wealth on to others or preserving a family business. The IHT has been criticised for being too high and difficult to pay. You cannot obtain the Grant of Probate to administer the estate without first paying the IHT and in some case estates are forced to borrow to pay the tax as the Executors of the estate do not have access to the estate until after the Grant of Probate is obtained.

The majority of UK wealth is held in private pensions and net property wealth. Half of the total aggregate wealth in Great Britain is held by 12% of households, yet the total wealth and wealth-related taxes as a proportion of GDP have not increased since 1965.

How will IHT change?

There have been proposals for many years regarding the updating of IHT. At present, IHT equates to less than 1% of the total taxes collected. In addition, it is difficult for HMRC to account for the amount of lifetime gifts which are not taxable as these gifts do not need to be declared. As such, the government has no idea how much wealth is being passed by lifetime gifts compared to the amount being gifted at death.

Whilst there have been many suggestions for the reform of IHT, the most popular is that of a low flat rate tax of between 10% and 20% (if the estate was over £2 million) on lifetime gifts and gifts on death. Most reliefs would be abolished, including BPR and APR. in addition, the NRB would be replaced with a death allowance which would be of a similar level as the NRB (£325,000) however would not be renewed every 7 years. Everyone would also benefit from a lifetime annual gift exemption of £30,000.

Any tax payable on an estate would be payable from liquid assets, i.e. cash. If the assets were illiquid, i.e. property or business assets, the estate would be eligible to pay the tax by instalments over a period of 10 years and in the case of business or agricultural property, this could be paid by interest free instalments.

The proposals confirm that the spousal/civil partner exemption and charitable exemption should remain available.

In addition, the Capital Gains Tax (CGT) free death uplift would be abolished. Currently, if you inherit property and sell or transfer it at a later date, your Capital Gains Tax liability will be calculated at the sale/transfer value less the acquisition value (the value of the asset when you inherited it) – deducting any allowances available. The proposals mean that the acquisition value would now be that when the property was purchased by the person who has died meaning the gain could be significantly higher.

All gifts over £30,000 per annum would be taxed at 10%. If the gift was cash, 10% would be withheld by the donor (the person giving the gift) however if the gift was an illiquid asset (business or property) the donor would have the option to pay over two years in interest bearing instalments (again, for business and agricultural property this could be interest free instalments).

Whilst the donor would have an annual exemption of £30,000 there would be no other reliefs available such as gifts in consideration of marriage and normal expenditure out of income relief as these would be abolished. The annual allowance could not be carried forward. All lifetime and death gits would be taxed.

Those who spread lifetime gifts over a number of years of less than £30,000 would be better off. However those making larger gifts would be worst off, although under the current rules this is subject to them surviving by 7 years. Larger liquid estate would be better off at lower rate of 10% however this doesn’t take in to account the abolition of the CGT uplift on death and taxing on lifetime gifts.

Whilst it would appear the reforms would take some years to be implements, there has been speculation that due to the current economic climate, these proposals could be introduced a lot sooner than anticipated. Anyone considering estate planning should be keeping up to date with any developments in this area.