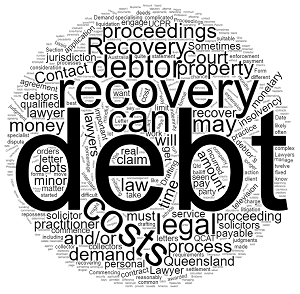 We previously did a blog entry about commercial debts from business to business and how using the Late Payment (Commercial Debts) Act in the absence of any fixed interest rate in a contract, there is a statutory rate of 8% plus a penalty charge per invoice that can be applied to a debt.  But how do you recover that debt? This blog entry is going to focus on the options available to you on recovering a debt. There are a number of ways debts can be recovered, this article will mainly focus on the options available at court.

A County Court Judgement is the first port of call if you are looking to take court action to recover a debt. There is a fixed procedure, we will focus here on small claims proceedings which are claims up to a value of £15,000.

Here is a summary of the procedure:

Most of you will have heard of County Court Bailiffs and seen programs such as ‘Can’t Pay, Take it Away’ where bailiffs are what are known as High Court Enforcement Officers recovering goods. A Warrant of Execution is an application that a person holding a County Court Judgement can make against a debtor. It involves applying to the court which does carry an additional court fee but again this is added to the debt. The court will then refer it to their bailiff who will set an appointment to see the debtor. The claimant will get notification of that appointment which will be at a specific date and time. The court bailiff might ask for some additional information on the debtor, such as alternative addresses, details of their appearance.

The bailiff then attends the debtor, normally at their home, and will seek to recover either a payment from that debtor for the County Court Judgement and any other court fees that have been added to it, or if they are unable to make the payment then they can recover goods to satisfy the claim. Those goods are then sold and the money from the sale proceeds are paid to the claimant to satisfy the debt.

If the details of the debtor’s employers are known to the claimant then another enforcement method is to make a Third-Party Debt Order, this involves obtaining a court order which will be directed at the debtor’s employer to deduct a sum from their wages to pay the debt, usually its in installments until the debt is paid in full.

A Freezing Order can be made in respect of a defendant’s bank account whereby their assets or in most circumstances their bank accounts are frozen and the bank is ordered by the court to deduct money from that account to satisfy the debt, again, this will involve an application to the court and for the court to officially make an order which will normally involve a hearing. The debtors bank details would need to be known in order to be able to use this method.

A Charging Order is where the holder of a County Court Judgement applies to the court to have a charge, which would not be too dissimilar from the charge that you would have with a mortgage, secured against the debtor’s property. This is made through a court application, again there is an additional fee which is added to the debt. The court will then make an interim charging order allowing the claimant to secure a charge by registering it against the Land Register of the debtor’s home. Before using this method, the claimant has to be satisfied that they can prove that the defendant owns the property, usually by obtaining a copy of the Land Register for the property that will be subject to the charging order.

After a Charging Order is obtained, the claimant can then apply for an Order for Sale. In this instance, the claimant is asking the court to order that the defendant’s property is sold and from the sale proceeds, given that the person claiming will have a secured debt because of that Charging Order they will recover the monies from the sale of the property. This involves an application to court, which again includes another court fee but this is added to the debt. The court will set a hearing and the debtor will have an opportunity to defend that Order for Sale, some examples of a defence would be to state that it would cause the defendant exceptional hardship as the effect of an Order for Sale would be that they would have to vacate the property. Another might be, that the amount secured against the property is not sufficient to warrant selling the property, for example, if the house is worth £500,000 and the debt is only worth £500.

If the court decide to grant an Order for Sale then the debtor will normally be required to vacate the property and the claimant then puts the property on the market or places it up for auction and seeks to sell the property and recover the debt from those sale proceeds. If there is a mortgage secured against the property, they would get notification when the application for a Charging Order is made, so that they will have an opportunity to make representations at the hearing.

After all of the secured charges and this would include the County Court Judgement secured against the property and any mortgages are paid off, as well as the fees associated with selling the property then any surplus funds are paid to the debtor.

If the debt is £5000 or over then the person owed the money can apply for a bankruptcy order against the defendant. This does not involve obtaining a County Court Judgement although bankruptcy is an option after obtaining a County Court Judgement but it is not a necessity. It involves making an application to the court and then the court will set a bankruptcy hearing to determine whether to grant the bankruptcy. It can be defended by the debtor but they would have to show that they have means of settling the debt, i.e. that they are solvent. It does put the debtor in a difficult position though because if they prove to the court that they are solvent then they are obliged to pay the debt. It is also a risk however for the individual owed the money because they have to be sure that the debtor has sufficient assets so that they can recover the debt. Bankruptcy is an expensive process and there is a hierarchy of who gets paid from the debtor’s assets, it will go as follows:

If you are owed money and you wish to proceed down the court route then the first thing you should be realistic about is you have to spend money to recover that debt through court fees and potential solicitors costs, as you have probably noted throughout the article most of these costs are payable upfront and although they are added to the debt, as we all know, a debt on paper is not the same as physically obtaining the funds. There are a wide range of options available but the key before determining whether to commence any court proceedings is to firstly exhaust all of the other methods in recovering the debt and secondly to be satisfied absolutely that the individual who owes the money has the means of settling it. There is very little value to proceeding down the court route, obtaining a County Court Judgement or even looking to make the person bankrupt if at the end of the day, they do not have funds to satisfy the debt. None the less, the options available to the individual owed money are extensive and robust and there are a number of different methods as you have seen to be able to recover debt.

This article is intended as a summary to give you an idea of what options are available. Each option has its own complexities and detailed procedure. If you are owed money or if someone is pursuing you for money and you would like further advice on any of the points in this article, detailed advice can be obtained by contacting our offices on 01341 281108, 01654 711499 or 01766 831882 or by emailing abright@alwenajonesbright.co.uk

Alwena Jones and Bright
We use cookies to ensure that we give you the best experience on our website. If you continue to use this site we will assume that you are happy with it.OkPrivacy policy