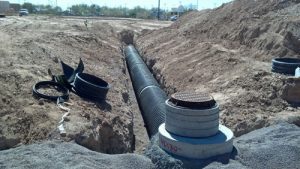 From October 2011 a law was passed that stated that all pre existing private sewers and all newly built sewers were to be automatically adopted by the water authority in the area where they are situated. For example, Welsh Water for Wales, Thames Water for London etc. These water authorities have a statutory obligation to maintain these public sewers and this also means they have a right by law to come onto the property where those pipes are situated to undertake works to them. So if you have a sewage pipe running through your garden then if that pipe needs to be repaired or replaced the water authority has the legal right to come onto your property to undertake works to that pipe provided that they make the land good or compensate you accordingly depending on the circumstances. It also means that anyone planning to build within 3 meters to or over a public sewer is required to obtain the water authorities permission before doing so. The purpose of this is to prevent damage to the sewers as a result of the additional weight of a new building that could cause it to collapse which ultimately could result in structural damage to the property.

What is a Build Over Agreement?

A Build Over Agreement is one with the water authority that sets out if you were undertaking work over or within 3 metres of a public sewer it will not negatively affect that sewer below and it also ensures that the water authority have sufficient access to the sewer so it can be repaired and maintained in the future.

What happens if you do not have a Build Over Agreement?

Obviously you would want to avoid a situation whereby the water authority can demolish part of your building however, if you have built over the sewage pipe after October 2011 then to resolve the matters the options are either;

Both of the above options are viable alternatives in place of a Build Over Agreement if one was not obtained at the time. It is important to have these in mind particularly if you come to sell the property as having built over a public sewer can cause issues in a sale and is not acceptable to most mortgage lenders which is why you need some alternative arrangement in place such as the options above.

Extensions that were in place before October 2011

If the property was extended over a public sewer before October 2011 then provided the pipe which was built over was private you would not need a Build Over Agreement. The October 2011 laws applied predominantly to pipes connected from properties directly into public sewers which may well have been situated along the public highway or along the rear of the property. This meant that the pipes directly linking the property to those mains pipes are most likely private and such when an extension was built over them, they remained private and a Build over Agreement would not have been necessary. It is important thought o establish when exactly the extension works were undertaken to see whether a Build Over Agreement was applicable at that time.

We hope this blog is useful. If you have any questions regarding Build Over Agreements or private/sewer pipes contact abright@alwenajonesbright.co.uk.